How AIM2EXCEL helped Kavya zero-in on her ideal career
Class 12.

Kavya, an above average student, was confused about the right career to pursue and has performance anxiety issues. She wanted to become a pilot but would stress out easily under pressure.

AIM2EXCEL mentors helped her zero-in on the ideal career for her basis the holistic profile and suggested techniques to deal with exam anxiety and overthinking issues.

Kavya was a class 12 student who chose the Science stream without Biology in 10+2. She was above average in academics and described herself as someone who tried to help others as much as possible but, sometimes felt that she did not get the same cooperation from others.

Kavya also added that she was an extremely anxious person who would get stressed out very easily in pressure situations. She also had the tendency to overthink and felt that she was often misunderstood by people around her. Her father was of the opinion that Kavya lacked the motivation to follow through with activities she starts with enthusiasm. Kavya had a strong inclination towards becoming a pilot, but her inability to deal with stressful situations became a roadblock.

Kavya took the AIM assessment and found the result to be engaging. Her report helped uncover hidden strengths and limitations which explained her day-to-day behaviour and habits. The AIM report also highlighted high levels of emotional distress, which would became an obstacle in her dream of becoming a pilot.

AIM2EXCEL mentors worked with Kavya to help her overcome her anxiety issues and advised her to maintain a feelings journal, where she would note down events whenever she indulged in overthinking along with her feelings, thoughts and behaviour in separate columns.

AIM2EXCEL also connected her to some pilots, to help her gain clarity about whether becoming a pilot was the right career option for her.

While Fashion Design was recommended to Kavya based on her AIM profile, our mentors further educated her about the choice. They showed her how her strengths aligned with the skill sets/ successful people required for this profession. Her high agreeableness, interest in creating new things and ability to convince people to her viewpoint would definitely ensure professional success as a fashion designer.

In the final counselling session, AIM2EXCEL mentors were able to ensure that Kavya achieved the much needed clarity about a career path of her interest.

After connecting with few a professionals in aviation and understanding the intricacies of the industry, Kavya realised that she may not enjoy becoming a pilot as much as she had initially thought.

Maintaining a feelings journal led to significant improvement in her ability to reduce her anxiety level in most, if not all situations. She could now identify situations which triggered her anxiety. Armed with techniques to handle such situations she was able to perform better in her exams.

Kavya has become much more confident about her career choice of Fashion Design.

This was possible because instead of focussing on her limitations, she leveraged her strengths and talents of high social intelligence and creativity to predict what people would like and to bring those ideas to life.

She is also currently exploring the field of fashion designing through the extra curricular activities suggested by AIM2EXCEL and is able to perform better in exams by able to manage her exam and performance anxiety. 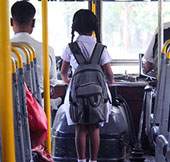 Confused about which stream to choose? Enroll in our program to get clarity & confidence about the future.